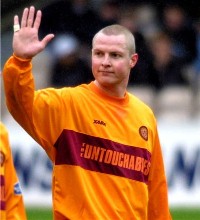 Tony Vaughan signed for Motherwell in January 2003 on a six month loan deal from Nottingham Forest. He had just returned from a knee ligament injury and found himself out of favour at the City Ground. He was hugely popular with the Nottingham supporters, who described him as a hard tackling and robust defender. While at Fir Park this tag was justified as he would pick up four yellow cards and one red in only 15 games. Vaughan’s debut came against Dundee United on the 2nd February 2003 in a 2-1 defeat. He did however help the club go on an impressive Scottish Cup run, which was ended in a 4-3 defeat at the hands of Rangers in the semi finals. Tony was able to organise the guy’s at the back and he showed great leadership, whenever Scott Leitch and Derek Adams wasn’t playing he would captain the side. Vaughan also netted once for the club and this came in a 2-2 draw against Dundee United in May 2003. The club would finish last in the SPL but the young side thankfully avoided relegation as Falkirk’s Brockville stadium didn’t meet the necessary requirements for the top league.

Tony also featured for Ipswich Town, Manchester City, Mansfield Town, Barnsley, Scunthorpe United and Cardiff City in a career that saw him play in the Premier League and each division in the Football League.