Motherwell were dumped out of the CIS Insurance League Cup by local rivals Airdrie courtesy of a Keith Lasley own goal.

The high-flying First Division side proved too strong for struggling ‘Well after they took the lead early in the game through an Owen Coyle penalty.

David Kelly levelled for the Scottish Premier League side after the break but, with just five minutes of the game remaining, Lasley rammed the ball into his own net to hand the win to the Diamonds.

This Lanarkshire derby demonstrated that the gulf between the top of the First Division and second bottom of the SPL is not a large one with Airdrie matching Motherwell in all departments.

For all Motherwell’s pressure in the early minutes of the game, they struggled to create anything in front of goal and it was the home side who threatened first.

Coyle fed the ball through to Mark Roberts as he burst towards goal but Coyle’s pass was too long and cleared by goalkeeper Mark Brown after five minutes.

After 11 minutes referee Kevin Toner pointed to the spot after ruling that Karl Ready had brought down Kevin James. 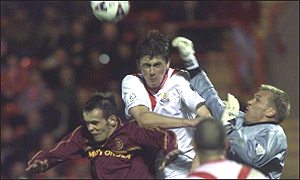 Coyle was looking dangerous for the Diamonds and he managed to get on the end of a James cross but the striker hooked the ball well wide of the post.

As the game approached the half hour mark, Motherwell almost got back into the game when Eddie Forrest’s opportunist drive from 20 yards was well saved by Ferguson.

Coyle produced an inch-perfect cross from the left wing but Lee Gardner’s superb diving header was just inches wide of the upright.

Stewart tried desperately to clear a Steven Hammell cross and smacked the ball off the underside of the crossbar – but Kelly pounced for Motherwell to bullet home a header from the rebound to level the scores.

Airdrie were unlucky not to go ahead again following a goalmouth scramble that saw both MacFarlane and Roberts denied before goalkeeper Brown eventually cleared.

With just five minutes to go, Airdrie clinched the win.

A long throw from Paul Armstrong was met by James, he flicked the header towards goal and Lasley – with plenty of space and under no pressure – fired the ball into his own net.

This would be the last game between the sides as Airdrieonians would go out of business at the end of the 2001/02 season.