Legendary manager John ‘Sailor’ Hunter’s side are famously in the annuals of Scottish Football as one of the greatest sides never to win the Scottish Cup. This was to be the first final in the famous tournament since Clyde defeated the side in the 1939/40 Competition.
It was hoped under the tutelage of George Stevenson that the side could finally bring the Scottish Cup back to Fir Park. Stevenson already had brought the League Cup back earlier in the season, a famous double was very much on the cards. Peterhead and Hamilton were easily seen off in the earlier stages in the tournament. The Quarter Finals brought two hard games against Ayr United as it took a replay to see off the men from Ayrshire. The Semi Final’s saw Hibernian beaten 3-2 in a tough affair.

Yet again the final proved to be a disappointment. A massive attendance of 131946 filled Hampden as Celtic for the third time would snatch the famous trophy from our grasp. Celts forward McPhail would net only goal in a match that Motherwell very much dominated, Aitkenhead, Kelly and Humphries all went close but sadly couldn’t find that cutting edge. 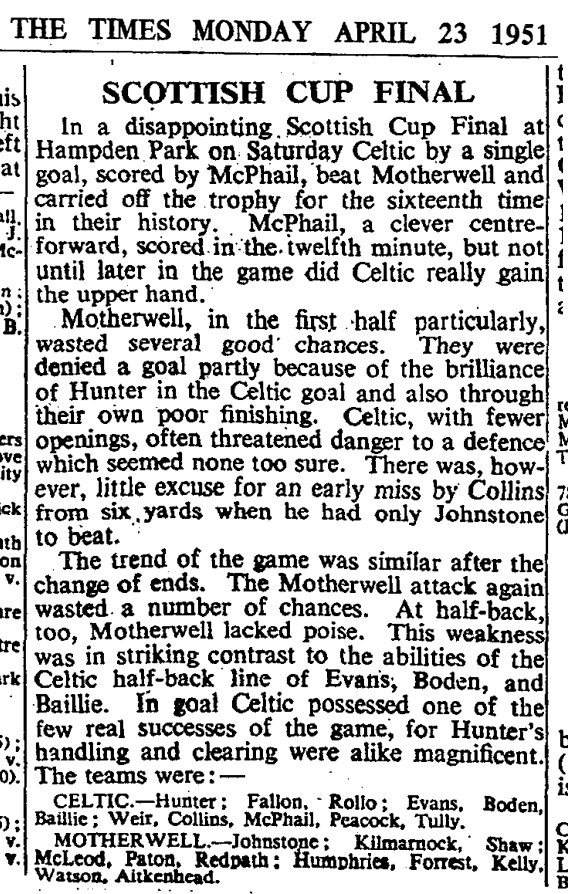