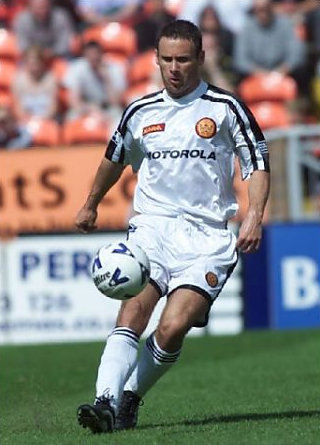 Ged Brannan was one of Billy Davies first signings as manager, who joined the club from Manchester City for a sizeable fee of around £375,000 in October 1998, this transfer came in the early days of new club owner John Boyle’s extravagant signings which also included John Spencer, who joined from Everton on loan as the club at grand plans to become the third force in Scottish Football.

Brannan had been a star player at Tranmere Rovers before winning a move to Manchester City in March 1997 but he would endure a tough time at Maine Road where he was mostly used as a squad player. Motherwell’s chief executive Pat Nevin had been a former team mate of Ged’s at Prenton Park, who brought him to the attention of manager Davies.

Ged proved to be a fine player albeit perhaps a little inconsistent, he had a great range of passing, excellent dead ball ability and an all round neat and tidy player. A joke amongst the Motherwell fans was that he kept his best performances for when the club had games live on SKY TV as he always seemed to score quality goals, namely against Celtic and Hearts.

Brannan made his Motherwell debut against Rangers on 28th October 1998, both new signings combined as John Spencer scored in a fine 1-0 victory. He would make 92 appearances for the club netting 18 goals.

After being embarrassed in the Scottish Cup at the hands of Ayr United, the midfielder announced that he was going to take up the offer to play some international football for the Caymen Islands who had found a loop hole in which they could use British based players in their senior squad, by doing this Ged missed a crucial game against Hearts. FIFA later stepped in to stop the Caymen Islands scheme which involved offering high monetary bonuses if they players could help them qualify for the World Cup.

Ged was later sold to Wigan Athletic and was later joined by former team mates Stephen McMillan and Lee McCulloch as it became clear the club was in financial trouble. He would have a brief loan spell with Dunfermline Athletic in 2003 before seeing out the rest of his career in the lower echelons of English football.