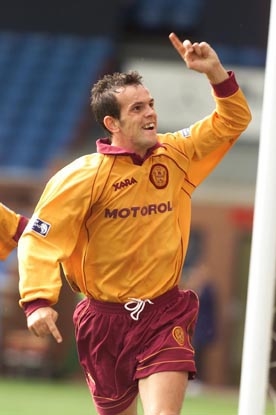 Stuart Elliott was signed for a fee of £100,000 from Northern Irish club Glentoran on 20th July 2000 and made his debut nine days later, coming off the bench in a 2-0 defeat against Dundee at Fir Park. He scored his first goal after seven minutes in a 3-2 defeat against Kilmarnock. He also netted the other in that game. In his time at Motherwell, Stuart established himself as a Northern Irish internationalist and he scored his only goal for his country in a 4-3 defeat at the hands of Bulgaria. He also established himself as a fans favourite. He scored in Motherwell’s 4-1 win over Kilmarnock. Stuart’s last game for the club came ironically enough against Dundee at Fir Park. This time however, he found himself on the winning side scoring as the ‘Well won 2-1. After he scored, Stuart revealed a T-shirt with the words ‘Well worth saving’ on it. However shortly after Motherwell went into interim administration, Stuart was sold during the summer of 2002 to Hull City for a fee of £230,000. In his two seasons at the Dossers, he made 53 starts, coming on 22 times as a substitute and scoring 23 goals.