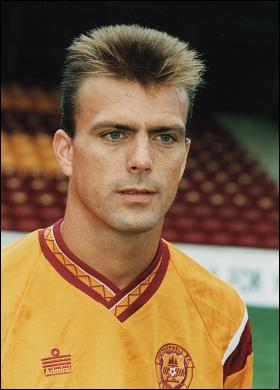 Luc Nijholt was signed for Motherwell by Tommy McLean who paid BSC Old Boys £100,000 for his services in August 1990 after he impressed the club in a short training spell. Over the next three seasons the Dutchman would make a sizeable impact as not only did he make over a century of first team appearances for the club, he played a pivotal role in helping the club win the 1991 Scottish Cup and also enjoyed a foray into European competition.

Capable of playing either in defence or midfield, his early ‘Well career wasn’t all plain sailing as he suffered a broken leg against Celtic at Parkhead in November 1990, he did however show great character as he would return to the first team only eight weeks later in January 1991 in the reverse fixture against Celtic.

Nijholt was tremendous at timing tackles with fantastic reading of the game, both semi final games against Celtic in the lead up to the 91 final were perhaps some of his best in a claret and amber jersey as his performance embodied all these traits. As a defender he was more than capable of getting forward and helped chip in with a number of important goals, many came from the penalty spot as he possessed pin point accuracy from 12 yards.

The club would struggle to build upon the success of the 1991 cup success and over the next few seasons it would be a fight to stave off the threat of relegation from the Premier League, Luc played his part and he was a popular player with the support but he looked to move on at the beginning of the 1993/94 season and manager Tommy McLean didn’t stand in his way. The 31 year old was sold to English Premiership side Swindon Town for £175,000 and he would spend the next two seasons with The Robins before finishing his career with Volendam.

Luc has begun his footballing career with Haarlem whom he made over 180 league appearances with, his next port of call was AZ, Utrecht, BSC Old Boys before he arrived in Scotland. After retiring Nijholt went into management with Dutch second tier side Stormvogels Telstar, he would have spells as an assistant at Red Bull Salzburg, Qatar and Shandong Luneng before briefly stepping into management again with Chinese side Meizhou Hakka. When the Motherwell managers job was vacant in 2007, he applied for the role but ultimately wasn’t successful, when the role has come up again his name has often been mooted.

Back in 2001 when the club celebrated the 10th anniversary of the cup win, Luc made a return playing for the cup winning side versus a legends select side, he also traveled back to Scotland to feature in Phil O’Donnell’s tribute match at Celtic Park.