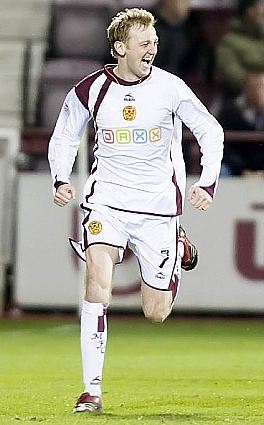 Despite being born and brought up in Motherwell, Stephen Hughes progressed through the Rangers youth system and would make over 90 appearances at Ibrox before moving to join Leicester City in January 2005. After falling out of favour at the Walkers Stadium he found himself on the transfer list. Both Motherwell and Hearts were keen to sign him and at one point the deal with the Jambos looked signed and sealed. However on 31st August 2007, Mark McGhee managed to sign the talented midfielder for an undisclosed fee.

Stephen would make his debut only a few days later, ironically against Hearts but sadly the Steelmen fell to a 2-0 defeat. He slotted into the side well as manager McGhee employed an exciting attacking 4-3-3 formation. He proved to be a quality addition to the squad as the club would go on to finish 3rd in the SPL table and secure European Football at Fir Park for the first time since 1995. In his two years with the club he would play over 70 games before moving to English League One side Norwich City. In October 2009, Hughes would win his first Scotland cap as he featured as a substitute against Japan.

Stephen would leave Carrow Road by Mutual consent in August 2011 after falling out of favour. He would struggle to find a club before coming back to Fir Park to train. Impressing manager Stuart McCall he was offered a short term deal with the club in November 2011. He would struggle to break into a settled side, he made his 2nd debut on 2nd December against Hibernian but the match was abandoned at half time due to a floodlight fire but he would feature the following week in a 3-0 over St Johnstone in Perth. At the end of the deal he was told he wouldn’t be offered an extension, soon thereafter he joined up with former ‘Well boss Craig Brown at Aberdeen.