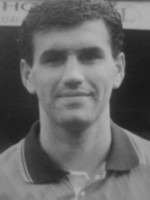 Despite being born in Blackburn it was with local rivals Oldham Athletic that Alex Jones made his first steps into the senior game with.

Unfortunately Boundary Park had no shortage of centre backs and his appearances were limited, only featuring 9 times for the Latics before his manager Joe Royle allowed him to join Fourth Division side Stockport County on loan.

Upon his return to Boundary Park he still had trouble breaking into the first team, it wasn’t until he moved onto Preston North End that he would finally achieve some consistent first team football, at Deepdale his defensive qualities were very much appreciated as he would help guide the north-west club to promotion in his first season.

When Alex joined Motherwell in 1992 most media outlets were viewing his arrival as another bargain transaction (the fee that was paid to Rochdale differs from various sources, from £35,000 to £60,000) by ‘Well gaffer Tommy McLean. Alex of course had a number of impressive attributes, most predominantly he possessed a massive build as well as strength which were crucial due to the nature of the Scottish game.

He made his Motherwell debut on the 1st February 1992 in a 1-1 draw with Hibernian, essentially Alex would make all his 13 first team appearances back to back before losing his place in the side in the penultimate game of the 1991/92 season. He did enjoy getting on the scoresheet against St Mirren in a 2-1 victory. Perhaps the biggest issue Jones faced in his time with Motherwell was a struggle against pacy strikers, the club itself were enduring a dismal season and much change was needed, Alex would soon rejoin Rochdale.