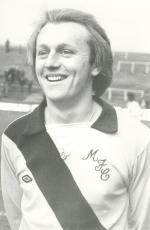 Jim started playing football for Troon Juniors when he was 15 years old and he made excellent progress. When he was 18, he signed for Kilwinning and the very next season, he emerged as one of junior football’s most prolific goal scorers with a haul of over 60 to his credit.

In October 1973, Ian St John snapped him up. In season 1974/75, he made 18 league appearances and five Scottish Cup outings. Jim’s skills made him an instant hit with the Fir Park faithful and at Bury as well. His last goal for the club came in a 2-1 victory over Dundee United on 22nd November 1975. After Bury, he went to Portsmouth, then he teamed up once again with manager Willie McLean at Ayr United but only on a month’s loan deal.