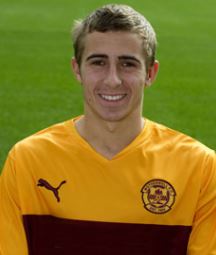 Glasgow born Midfielder Pollock progressed through the club’s youth system. He was perhaps a surprise inclusion on the team sheet when Motherwell played Celtic in December 2009. He came off from the bench and put in a decent display as the side were beaten 3-2. He wouldn’t appear in the first team again until Stuart McCall was manager, Jamie would make a few more appearances from the bench best result perhaps being a fantastic 2-0 victory over Celtic. He had a short loan spell at Clyde before leaving the club at the end of the 2011/12 season. After a short trial at East Fife he was subsequently offered a contract.