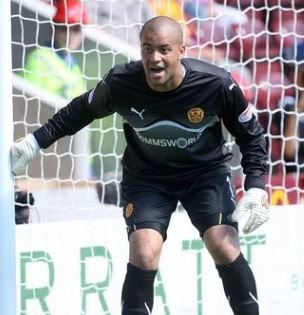 Darren Randolph signed for Motherwell on a three year deal on the 1st July 2010 coming in on a free transfer from Charlton Athletic, the young Irish goalkeeper had the unenviable task of being the man who succeeded John Ruddy who had won the clubs 2009/10 player of the year award due to his outstanding performances between the sticks.

From the onset, it was clear that the Motherwell manager Craig Brown had made a real coup as Darren proved to be a talented shot stopper and commanded his area very well he was very consistent with his performances and rarely had a poor performance.

Randolph made his debut in the Europa League against Icelandic side Breidablik as the side recorded a 1-0 win. After establishing himself as first choice keeper the ‘Well faithful quickly drew comparisons between he and Ruddy, the Englishman the season before of course would manage to keep a record clean sheet record recording 15 shut outs, Darren would go onto break this record in an impressive debut season, the record was broken when Celtic failed to find the net in a game the Steelmen won 2-0 at Fir Park.

Darren helped the club enjoy a fantastic season in 2010/11 as not only did the side finish the best of the rest behind the Old Firm in the SPL, but they also reached their first Scottish Cup Final in 20 years, the ‘Well also reached the League Cup Semi Final stage but it was Celtic and Rangers respectively that put paid to any hopes of winning silverware in those competitions.

Over the next few seasons it was astounding that the club received no serious bids for the keeper, but to Motherwell’s gain, Darren would help the side to back to back runners up finishes in the league, consistent European football which also seen the Steelmen play in the Champions League for the first time against Panathinaikos.

Personal honours came in the shape of being named in the PFA Scotland’s team of the year twice (2011/12 and 2012/13). Team mates, Michael Higdon, Nicky Law and Shaun Hutchinson were also named in the 2012/13 side, which showed the talent the club had in abundance at the time.

Due to his fine form at Fir Park, he was always on the cusp of international honours having already represented Ireland at U15 to U19 and B level, Randolph received his first call up in March 2011 but would have to settle for being a reserve.

Darren made his first full international debut against Oman on the 11th September 2012. He would remain patient and over time he would eventually cement the first team position as his own, he enjoyed playing in the Euro 2016 competition when he played against the likes of Sweden, Belgium, Italy and France.

Upon leaving Motherwell, he signed for English Championship side Birmingham City where he immediately established himself as the number one, his performances wouldn’t go unnoticed for the Brummies as in 2015 he signed for Premiership side West Ham United. Later in his career he joined Middlesbrough for a sizeable fee.