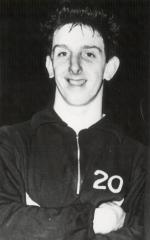 Signed from Penicuik Athletic in 1956, Alan was a long – serving goalie who never quite established himself as the regular number one. His early career was disrupted by two things first national service, and second the excellent form of Hastie Weir. He finally made his debut in a 5-2 home defeat by Falkirk in October 1957. The highlight of his stay was probably starring in the winning side in the second eleven cup in 1954. He later joined Cowdenbeath who were managed by former Rangers and East Fife stalwart Andy Matthew. Tragically, Alan was killed in a car crash when he was only thirty six years old.