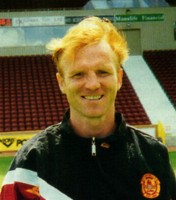 Alex McLeish was installed as Motherwell player/manager in August 1994 alongside his new assistant manager Andy Watson, he had beaten off stiff competition from the likes of Dutchman Guus Hiddink, Peter Reid and former ‘Well defender George Burley for the role.

Big ‘Eck’ stated he was eager to start his managerial career but only accepted the role on the provision that midfield starlet Phil O’Donnell was not sold to another club as Celtic amongst others were sniffing around.

McLeish’s first game in charge came in the UEFA cup where the Steelmen easily dispatched Faroese outfit Havnar Boltfelag which setup a glamour tie against Borussia Dortmund in the following round. After only a few weeks into the 1994/95 league season, Alex obviously decided the club could do just fine without O’Donnell as he accepted a fee of £1.75 million from Celtic.

In his first season, the club played some fantastic attacking football which clinched runners up spot in the league, it was hoped that the side could build upon this but for the rest of his tenure Motherwell found themselves embroiled in relegation dogfights which were just narrowly avoided on more than one occasion.

He had a luxury afforded to him no other ‘Well manager had enjoyed in the past, all the money gained from the O’Donnell transfer was pumped into his transfer kitty and big sums of money were splashed on the likes of Shaun McSkimming which broke the clubs outgoing transfer record at the time, he broke it again when popular Dutchman Mitchell Van Der Gaag arrived for a fee of £400,000. The arrival of Scott Howie also meant a generous fee headed to Norwich City as well as £150,000 to Aberdeen prospect Andy Roddie.

Some transfers were somewhat creative in that he added players that he never saw in his plans outgoing, one unpopular example of this was over £150,000 plus Steve Kirk and Paul McGrillen head to Falkirk for Eddie May, due to the popularity of Kirk it put immense pressure on the new signing. In almost 4 years at Fir Park ‘Eck’ spent over two million pounds trying to put his own stamp on proceedings but most of this cash had been spent early in his tenure. The introduction of the Bosman Ruling of course didn’t help matters as losing talent like Paul Lambert and Rob McKinnon was a massive blow as that was millions lost in fees.

As the money dried up future transfers would see the likes of veteran’s being signed up like Fraser Wishart and Mickey Weir and a revolving door of foreign trialists would come in such as Eric Garcin and Gunni Jonsson, McLeish spent a small fortune on flying in many trialists but this this rarely brought much success on the transfer front. In fairness to McLeish he did try to embed a lot of youth into the first team as Innes Ritchie, Ian Ross, Lee McCulloch and Greig Denham all made the break through under his guidance.

Hindsight is a wonderful thing as the saying goes, but it was rumoured that he knocked back signing youngster Ole Gunnar Solskjær in favour of signing John Hendry from Tottenham Hotspur. Over the years Alex also passed on signing the likes of Stern John, Peggy Arphexad (signed for English Premier League club Leicester City a few weeks later) and Marvin Andrews all of whom had varying degrees of success in the game.

In February 1998, Alex upset a lot of ‘Well supporters by jumping ship to fellow relegation strugglers, a side Motherwell had beaten 6-2 only weeks prior, the Hibees eventually were the team to slip to relegation.

At Easter Road, McLeish built a strong side which won the First Division easily and secured a return to the SPL only  twelve months later. He enjoyed a decent management career where he later served Rangers where he won all the domestic honours including a League Cup win over Motherwell. He later had almost a year in charge of Scotland before taking a crack at English football where he served Birmingham City and won them promotion the Premiership as well as winning the 2011 League Cup against Arsenal but he crossed the divide when he moved onto rivals Aston Villa before serving Nottingham Forest without really setting the heather on fire.

Alex tried his hand on the continent first spending a season with Genk in Belgium then Zamalek in Egypt. Perhaps somewhat of a surprise he returned for a second spell as Scotland manager in February 2018, he would only last until the following April as the side struggled to make any real strides forward, they did win their 2018/19 Nations League group by pipping Israel and Albania but a humiliating 3-0 defeat against Kazakstan saw confidence plummet.