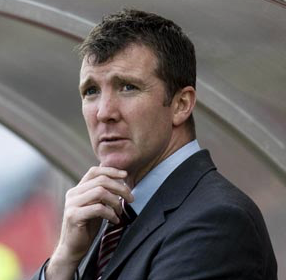 Jim Gannon was appointed the 20th manager of Motherwell Football club in June 2009 only a matter of days before the side were to host welsh side Llanelli in the First Qualifying round of the Uefa Europa League.

Perhaps a surprise choice to the fans as Former Fulham and Northern Ireland Boss, Lawrie Sanchez, Former Republic of Ireland gaffer Steve Staunton and former Watford boss Aidy Boothroyd were all eager to get the vacant position.

Gannon had a good management track record as he built up an exciting young side with Stockport County with a thread bare budget, sadly the club going into administration cost him his job.

He immediately seemed to be a great choice as he snapped up good quality young players with the likes of Chris Humphrey, Giles Coke, Steve Jennings, John Ruddy, Tom Hateley, Lukas Jutkiewicz and Yassin Moutaouakil all joining from English clubs. He also gave youngsters Ross Forbes, Paul Slane, Jamie Murphy and Shaun Hutchison the chance to shine from Motherwell’s youth setup and they certainly excelled in the side.

His tenure perhaps didn’t get off to the best start results wise as he perhaps oversaw one of the worst defeats in the clubs history as the side fell to a 0-1 defeat in the Europa League against Welsh outfit Llanelli but he could be somewhat forgiven as the club had been left with a threadbare squad and his appointment had came days before this actual game, he would enjoy a degree of redemption as the side managed to turn it around in the second leg.

Gannon tried to implement a playing style at Fir Park which was more popular on the continent which involved playing from the back and keeping the ball on the deck, the side initially found it difficult to adjust but it was nice to watch when it did pay dividends.

Results were a mixed bag in the Europe as the side managed to enjoy three qualifying rounds before being halted by Romanian giants Steaua Bucharest. Domestically however the side proved hard to beat but they were perhaps guilty of drawing far to often when they should have won, Jim at times threw up a few surprises when he gave debuts to teenagers Jordan Halsman, Steven Meechan and Jamie Pollock against Celtic but his emphasis on giving youth a chance at Fir Park was certainly commended. He was named the manager of the month in October 2009.

He was clearly a feisty character to deal with early on as it became clear that he had an issue with some senior members of the squad, most notably Stephen Craigan and Keith Lasley who at one point looked to be heading out the club as a consequence. On numerous occasions he also made substitutions early in games, clearly happy to change things early if he felt he wasn’t getting enough from his players.

The former centre half also had numerous weird statements released to the media, not only was he at loggerheads with SFA head of referee development Hugh Dallas following his criticism of Scottish referees. Jim was also critical of his predecessor Mark McGhee after the former boss had speculated in the press on possible transfers of Motherwell players. He was eventually dubbed ‘Loose Gannon’ as a consequence with all the controversy he courted with, eventually he refused to speak to any media as he claimed that he didn’t want to cause any further issues.

As it transpired on the 28th December 2009 he was sacked from the managers role at Fir Park, the side seemed to go off the rails completely that month losing all their games to Hibernian, Celtic, Rangers and St Johnstone, the club however stated that Gannon “was not fully committed to the club” as their reason for his dismissal. Reportedly he was working without a contract and was yet to sign his longer term deal. It was also reported that he had been touting himself for other jobs that had become available in England namely the vacant role at Sheffield Wednesday.

Despite his turbulent short time at Fir Park he could be praised in the signings he made for the club and the style of play he tried to implement.

After his Motherwell departure he did manage to secure a good job with Peterborough United who were in the English Championship, but again issues regarding contracts and confusion on signing players would impact his time with The Posh as they slipped to relegation.

Later in his career he was appointed manager of Port Vale but he has the dubious honour of being their shortest reigning manager, he was hugely unpopular with their fans and received criticism from his own playing staff due to his man management. He later returned to Stockport County before moving onto Northwick Victoria but he would again make a further return to County when he returned in 2016.