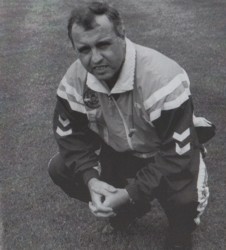 Tommy McLean began his management career with Morton before linking up at Fir Park after just a year at Cappielow. His reign as Motherwell boss would last from June 1984 to July 1994, his ten year reign was certainly interesting as the club went from the low of relegation battles to title challenges. He had to prove his mettle and resolve from an early stage.

The club was not at its financially strongest when he took over, he handled transfers with considerable skill, and he brought in players such as Davie Cooper, Tommy Coyne, Craig Paterson, Bobby Russell and Rab McKinnon to Fir Park, not to mention he liked to dabble in the foreign market which seen a number of Dutch players join the club perhaps most notably Luc Nijholt and Sieb Djikstra.

In 1991 he steered the club to the Scottish Cup in thrilling fashion and for a decade he kept the club in the top flight. There were however a few nervous flirtations with relegation. He left Motherwell in July 1994 along with his assistant Tam Forsyth but was quickly installed as the new Hearts boss. This move did not work out as the Gorgie outfit struggled in the league and he was out of football for almost a year as a result.

Tommy took up a manager role at Raith Rovers, this lasting six days before moving to Dundee United, reminiscent of his days at Fir Park he liked to dabble in the transfer market and brought a continental feel to his squad at Tannadice, on his return to Fir Park with the Terrors he enjoyed a 1-3 victory over the Steelmen. The United job would be his last manager job, he would eventually serve both Rangers and Dundee United in director of youth football roles.

His brother Willie managed Motherwell in the 70s, his other brother Jim had enjoyed success with Dundee United where he enjoyed league and cup success in the 80s.