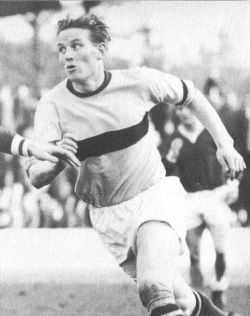 Signed from Arniston Rangers in 1949, Charlie was a distinguished wing half. Tall and blond he was easily one of the most elegant players of his era. Twice Motherwell player of the year (1957 and 1958) he was also capped at league and B international level. He was a Summer Cup winner in 1965 and 11 years earlier a beaten League Cup finalist. He stayed with ‘Well for 17 years and made 313 league appearances. He was awarded a testimonial match which was played against Rangers on the 24th May 1967, the final score was 1-1. Undoubtedly one of the all-time greats at Fir Park.