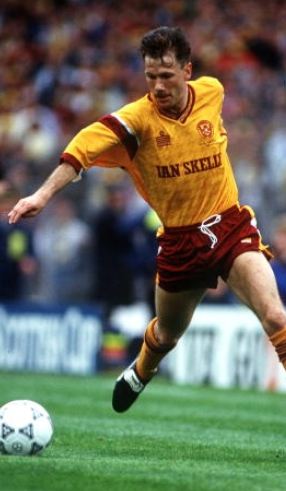 Ian Angus joined Motherwell in 1990 as part of Tommy McLean’s constant rebuilding programme and again he was a real squad player, playing in a number of positions across the midfield and at left back. He became a key component of our successful cup run in 1991, playing in every round up to the final, including a winning return to Pittodrie. It looked as though Ian would miss the final as he picked up a knock in the semi-final replay which looked as though it would keep him out. Thankfully he was fit and when he struck home our third goal on the day it looked as though we were on easy street. Being Motherwell of course we went on to make things a bit more difficult.

Ian Angus was probably never seen as the most exciting or glamorous of players in a side that included the likes of Cooper, Arnott, and Boyd. But we cannot forget the role he played in one of the most successful ‘Well teams of all time, his name will always be on the list of 13 names that we rhyme off when discussing the 18th May 1991.

Whilst a player with Aberdeen he also won a Premier League Winners medal and a European Cup Winners Cup medal.