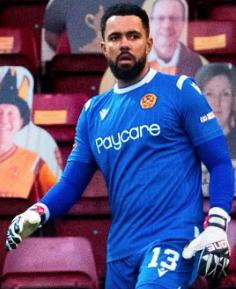 Goalkeeper, Jordan Archer was a bit of a surprise addition when he signed for Motherwell in late October 2020. The side had been going through a bit of a goalkeeping crisis as first choice Trevor Carson was ruled out for a long spell alongside his backup Scott Fox who was injured at the beginning of the season and it was mentioned he’d be lucky to resurface at all during the campaign.

Archer came with a fairly decent pedigree as not only had he been capped for Scotland but he had made over 160 first team appearances for Millwall serving the club in League One and the English Championship.

The shot stopper had served the likes of Tottenham Hotspur but struggling to break into the first team scene at White Hart Lane he was farmed out on loan to gain some vital experience serving the likes of Harrow Borough and Bishop’s Strortford before enjoying spells with the likes of Wycombe Wanderers and Northampton Town.

Jordan’s time in Lanarkshire was brief as he only signed a short term deal helping the club alleviate the injury issues. ‘Well boss Stephen Robinson had actually signed towering keeper Aaron Chapman before Jordan arrived so both battled it out for the number one jersey which Archer eventually claimed.

While his short stay in North Lanarkshire helped the club in their time of need, it also helped put Archer in the shop window as he was clubless for many months. In January 2021 he signed a deal with English Championship Club Middlesbrough.

Born in Walthamstow in England, he was eligible to serve Scotland through his mother and grandparents. Archer would gain caps with Scotland at U19, U20 and U21 level and he had one full international cap to his name.