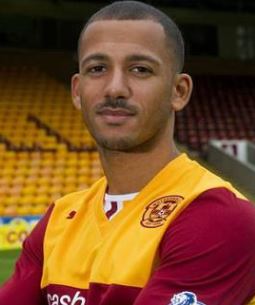 Somewhat of an enigma, Lionel Ainsworth was a small winger who was blessed with outstanding shooting ability as well as possessing rapid pace.

During his time at Fir Park the biggest issue would be maintaining a degree of consistency but in truth this was an issue he had before joining Motherwell, hence why he had so many clubs on his CV. Lionel had joined Motherwell on an initial six mouth loan deal on the 29th August 2013 as a 25 year old, his transfer to the Steelmen would be the 14th transfer the Englishman would be involved in.

Ainsworth made his debut only a matter of days after signing with the club where he came on as a late substitute in a 2-1 win over Kilmarnock, this was followed up by another appearance from the bench at Tannadice against Dundee United but this time the Englishman would give an example of the quality he possessed by slinging an outrageous long shot right into the top corner, it was these types of goals the Motherwell fans would become accustomed to when Lionel got on the scoresheet.

As he entered the final month of his deal over the 2013 festive period, he would enjoy some fine form where he netted four goals in four games, manager Stuart McCall adequately impressed by the wingers form extended the loan deal until the end of the season. Despite having a relatively successful season with Motherwell where he netted 11 goals plus many assists his parent club Rotherham United were happy to allow Lionel to leave and he would eventually sign a one year deal with the club.

Looking back on his time at Fir Park the 2013/14 season was his best in terms of goals return, during the 2014/15 campaign the club as a whole stuttered as they flirted too close to the relegation places all season, Ainsworth found his form was inconsistent and often found himself in and out of the starting eleven, when it mattered most he put in two great performances against Rangers in the Playoff Final where he would score twice, once in each tie as a counter attacking masterclass dispatched the Ibrox outfit 6-1 over the two legs. Following the final whistle a scuffle broke out as Rangers defender Bilel Mohsin didn’t take too kindly to the battering received on the pitch, he proceeded to attack ‘Well forward Lee Erwin who pushed him after the Tunisian refused his handshake, Lionel alongside defender Fraser Kerr stepped in to stop the melee but both would eventually receive red cards for their troubles.

Lionel signed a new two year deal with the club in 2015 but he struggled to replicate his form from his early days with the club and he eventually lost his place to young Chris Cadden who broke through from the youth academy.  The winger certainly was a frustrating player, everyone was aware of the qualities he possessed but he just struggled to translate this onto the field consistently enough, had he done so there was no doubt he would have managed to carve out a career at a much higher level.

Ainsworth left behind the memory of a number of fantastic goals particularly his debut strike against Dundee United, his 35 yard efforts against both Hamilton and Partick Thistle and his free kick from an acute angle against Kilmarnock in his final game at Fir Park, these goals will certainly be ingrained in the memory of ‘Well fans for a long time.

A contract extension was put on the table for the winger at the end of the 2016/17 season, Lionel stated he loved life at Fir Park but ultimately decided to move on where he joined former ‘Well midfielder Derek Adams Plymouth Argyle side. As it transpired, Motherwell manager stated that Lionel had been offered a contract on reduced terms but with more performance based bonuses.