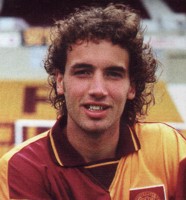 Born in Zutphen in the Netherlands, former Dutch under 21 international defender Mitchell Van Der Gaag was signed from PSV Eindhoven by Alex McLeish in March 1995 for a fee of £400,000 which was a record fee for the club at the time, the transfer came off the back off the departure of Phil O’Donnell to Celtic earlier in the season for again a record transfer fee. Not much was made of the transfer at the time as the news was firmly focussed on the tragic passing of former ‘Well legend Davie Cooper who tragically took ill while filming a kids football show.

Mitchell would suffer a difficult start to his Motherwell career, despite enjoying a solid debut in which the Steelmen drew 1-1 with Celtic at Parkhead an injury sustained against Partick Thistle would effectively end his season prematurely. Worse was to follow however, despite returning fighting fit at the beginning of the 1995/96 season and playing against MyPa-47 in Europe, he would suffer from another injury that would rule him out for up to six months.

Van Der Gaag returned to the first team fold to help them stave off the threat of relegation which included a run of six wins and a draw with no goals conceded, which came off the back of a run where the side were struggling to score and keep clean sheets, he proved to be a classy addition to the squad as not only was he a solid defender but he was also a handful for opposition defenders as knew his route to goal.

His stay at Fir Park was mainly spent being embroiled in relegation battles, one lasting impression that is still talked about to this day is the fine free kick routine between himself and Mickey Weir, with relegation looking a distinct possibility and Motherwell trailing 1-2 on the final day of the 1996/97 season to Dunfermline Athletic, Weir laid off the ball to Van Der Gaag who unleashed a venomous drive that nestled right into the top corner, a sensational goal which led to the fans going bedlam in the stands.

It was hoped that a new contract would be forth coming in the summer but Mitchell was sold to Dutch side Utrecht with the club managing to recoup all that they had paid for him in March 1995. He would carve out a fine career in the game also enjoying a spell with Marítimo, who he would later manage. In 2015 he came close to getting the Motherwell managers job, but despite the club stating he was more than worthy in taking the position, it was just the wrong time.