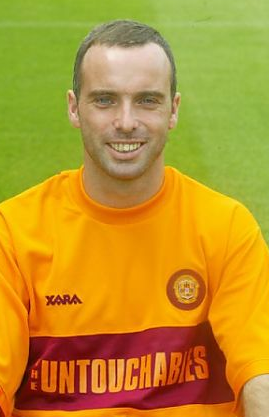 Local lad ‘toastie’ signed up from Shotts Bon Accord as an 18 year old in 1991, with the club still celebrating after their Scottish Cup triumph. After two seasons on the side-lines, Tommy McLean gave the youngster his debut in the opening game of the 1993/94 season and he got off in fine style with a debut goal at home against Celtic. Over his six years with the club, he was given many opportunities in the first team but his lack of goals became apparent that he might not be able to cut it at Premier League level. Burns was unable to command a regular start with Motherwell and he left in 1997 for a short lived spell with Den Bosch in Holland.

After enjoying a fruitful season with Partick Thistle in 2002/03 where he scored an impressive 17 goals (5 against Motherwell) in all competitions as he helped the Jags maintain their SPL status under the stern guidance of John Lambie, ‘Well gaffer Terry Butcher managed to persuade him to sign for the club alongside Stephen Craigan much to the chagrin of everyone associated with Partick.

Despite adding a wealth of experience to a youthful ‘Well side on his return, he again lacked the killer instinct in front of goal and it wouldn’t be until February 2004 where he would net his first goal as it happens he would enjoy a double, this coming in a 3-2 win in the Scottish Cup against Queen of the South, Toastie wouldn’t need to wait long for a league goal as he managed to finally score against Dundee in a entertaining 5-3 victory against Dundee days later. Despite starting the season as forward, Alex was eventually moved into an attacking midfield role as the manager preferred to play a 442 diamond formation, during the 2004/05 season, Burns was loaned out to Clyde before eventually moving on.  After he retired from football he go on to become a Police Officer.