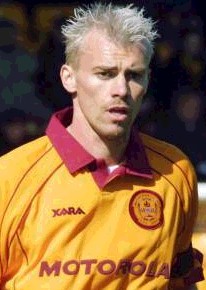 Tall defender, who could easily be identified as he sported bleach blond hair. Eric Black signed Franck Bernhard on a short-term deal nearing the end of season 2001/02. Franck made his ‘Well debut against St Johnstone at Fir Park which concealed the Perth side’s relegation to the First Division. He slotted in at right back at the expense of Martyn Corrigan who was moved to the centre of defence, but in truth his debut was a mixed bag as he initially struggled to adapt to the pace of the Scottish game, but his second half performance was solid enough as the Steelmen ground out a 1-1 draw. Franck played the following week against Dundee United at Tannadice but the ‘Well went down 1-0. His final match was against Hibernian at Easter Road, he came on as a substitute but Motherwell were soundly beaten 4-0. Sadly the club had to release Franck as the club went into administration and had to cut the costs. 19 players were told they would have to leave and with his contract just about to run out their was no chance of any renewal, Bernhard was released making only 3 appearances for the club.