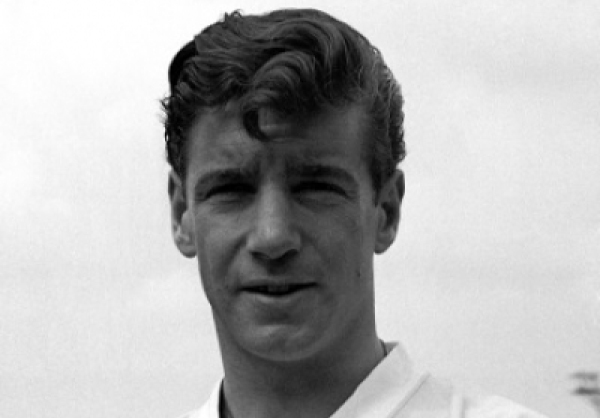 Gerry Baker was born in 1938 in New Rochelle, New York to Scottish parents, he served Larkhall Thistle before signing for Ted Drake’s Chelsea in May 1955. He would only stay at Stamford Bridge for 16 months before he was recruited at Fir Park in 1957 in a transfer that cost the club £750.

Gerry was an outside-left and was unable to oust the impressive Andy Weir, Pat Quinn, Willie Hunter and Ian St John who of course would all serve the club with such distinction. It was perhaps little surprise that he would only make the twelve appearances in claret and amber before moving onto new pastures.

He joined St Mirren in November 1958 for £2,000 a move which was timed to perfection, he scored on his debut in a 2-1 win over Hibernian whose attack was actually spearheaded by none other than Joe Baker, Gerry’s brother. He would write his name into the Paisley sides folklore as he would net in every round of the Scottish Cup that season as the Buddies would go onto lift the cup by beating Aberdeen which is still considered to be one of the best Scottish Cup finals.

Gerry was a prolific striker throughout his career, if his route to the ‘Well first team wasn’t barred by the Ancell Babes it would be no doubt Motherwell would have enjoyed an ample goal return. At Love Street, Gerry made 81 appearances scoring 66 goals which won him a move to Manchester City who paid £17,000 for his services.

Despite his success he was always somewhat stuck in the shadow of his brother Joe who would go on to represent England, Arsenal, Nottingham Forest, Hibernian, Torino, Sunderland and Raith Rovers. Both brothers were actually brought up in Craigneuk but due to stringent ruling on eligibility for countries at the time Gerry would represent the United States and his brother England as he was born in Liverpool.

+ Gerry scored 10 goals in St Mirren’s record 15-0 win over Glasgow University in the Scottish Cup first round on 30th January 1960 (his brother was to hit 9 for Hibernian in a remarkable family double.)