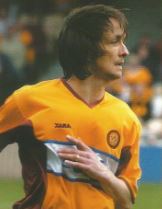 Pretty much in the veteran stages of his career when Terry Butcher offered him a short term deal in March 2005. Gerry Britton had been training with the club for a short time, he had been co-manager alongside Derek Whyte at Partick Thistle but as the Jags had been struggling in the league he was sacked in January 2005. Gerry would only make three appearances for the club all coming from the substitute’s bench. The most notable of which came on the 22nd May 2005 where a late Scott McDonald double denied Celtic the title. Gerry could have actually had his own name on the headlines as he had an open goal with the score at 1-1 but instead of squaring it McDonald opted to go for glory alone his shot of course thankfully nestled in the back of the net for that famous win.

Gerry would later play for Brechin City before becoming manager of Stranraer. He was perhaps better known for his spells with Partick Thistle, Dundee and Dunfermline Athletic where he would often play the pantomime villain role, one of those characters that you hate to see play against you but love him in your side, shame that he joined the Steelmen so late as his career was fizzling out.

In the latter part of his career he clearly though ahead about what he would do after his football career came to an end and he studied for a law degree, he would eventually become a defence lawyer.