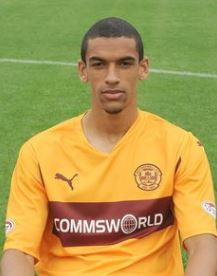 Signed on a six month loan deal at the beginning of the 2010/11 season by Craig Brown. Nick arrived from Blackburn Rovers where he was on the fringes of the first team at Ewood Park. He would make his ‘Well debut as a sub in the opening day of the season in a 3-2 defeat against Hibernian, before making his first start the following week where he netted the winner in a 1-0 win over Kilmarnock.

Nick proved to be a great capture as he proved to be a real threat going forward, in his twenty first team games he would net on ten occasions. His best performance came in November when he netted a hat trick in a 4-0 win over St Johnstone. New Motherwell manager Stuart McCall was keen to extend Blackman’s deal until the end of the season, Nick stated that if he were to return to the SPL Motherwell would be his preferred destination. As he returned to Blackburn after his loan deal expired, Blackman was offered a new deal due to impressing during brief spell at Fir Park. It then became apparent former ‘Well boss Craig Brown was keen to take the young Englishman to Aberdeen, it proved to be a huge disappointment when he opted to go to Pittodrie. He wouldn’t find too much success in the Granite City as he would only hit the back of the net twice in 18 appearances.

Nick would make a handful of appearances for the Blackburn first team but would ultimately struggle to carve out a first team place, he would join English League One side Sheffield United in August 2012, where he would link up with former ‘Well striker Chris Porter. He would later sign for Premiership strugglers Reading for a fee reported of around 1.2 Million after some impressive performances at Bramall Lane. Later in his career Championship side Derby County would pay over 3 million for his services.