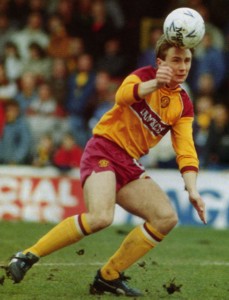 Tom Boyd came to Fir Park when Jock Wallace was the manager but he was actually signed by his assistant, Frank Conner whose judgement at the time was obviously spot on as Tom became a top class professional in no time at all. Frank of course would play a pivotal role in the rapid development of Boyd.

During 1983 Tom managed to break into the Motherwell first team under the guidance of Tommy McLean, who gave Tom the captain’s armband in 1985 making him one of the youngest ever captains not only to lead the club but to lead a side in the Premier Division. Tom would win many admirers, he was an intelligent full-back who had the drive to get forward by making fantastic over lapping runs.

In March 1990 he burst onto the international scene where he gained a “B” cap for Scotland against Yugoslavia, Tom of course already had five under-21 caps to his name by this point. It wasn’t too long before he would make his full debut for Scotland, winning his first cap against Romania in September 1990 in a European qualifier, this was swiftly followed by a second cap against Switzerland.

After guiding Motherwell to the cup win in 1991 Tommy decided to join Chelsea for a fee of £800,000, an all-time record fee for Motherwell at the time. At Chelsea he started to receive more international recognition but could not hold down a regular place at Stamford Bridge as the club often played three at the back with Boyd often the player who missed out. Celtic had been keen to sign him on numerous occasions but due to lack of finance the move never materialised so it was no surprise when he did join the Glasgow club in 1992 in a deal which seen Tony Cascarino move to Stamford Bridge in a swap deal.

On his first return to Fir Park with Celtic he endured a tough time as he was sent off and conceded a penalty for fouling Dougie Arnott as his new side slumped to a defeat.

His early years at Parkhead were in a pretty much transitional period and he would need to wait a number of years to enjoy any further silverware, he would however carve out a fantastic career with the Hoops winning 8 trophies.

By the time Tom had retired from international duty, he had won 72 caps scoring the solitary goal, he also enjoyed representing the country at Euro 1996 in England and at the 1998 World Cup in France.

Tom started his playing career as a sweeper and was naturally right footed but adapted to playing left back or left midfield if he was needed in that position. He truly was one of the finest full backs to serve the club. In March 2007 Motherwell had an official event which honoured some of the best players and managers to represent the club, the even aptly named “Greatest Ever Team”, Tommy would win the award of the greatest captain.

The Scottish Cup final was one of Tommy Boyd’s finest games in the claret and amber. As captain, he battled for 120 minutes on the left and was rewarded at the end with a Scottish Cup winner’s medal in his first final. However Tommy was frightened that he would miss the final because of injury which also kept him out of the semi-final in which Motherwell defeated Celtic 4-2. Fortunately, Tommy McLean stuck by him and he played in his usual jersey and captained the team to a historic success.