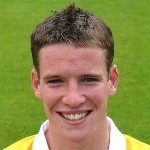 Adam came through the youth ranks at Motherwell, his great-uncle Tommy Coakley also played for the club in the Mid 60’s. A consistent goal scorer for the Under 19 and Reserve side it seemed only a matter of time before he would break into the first team and make immediate impact. His debut came on Boxing Day 2005 as Aberdeen were visitors to Fir Park, Adam came on as a late sub and the Steelmen ran out 3-1 winners. Vying for the first team jerseys seemed difficult for the youngster as Striker’s Scott McDonald, Jim Hamilton, David Clarkson and Richie Foran were all performing consistently well. Despite being such a promising talent he would certainly fail to deliver on the big stage as he would only make another two sub appearances before manager Maurice Malpas let him leave the club at the tail end of the 2006/07 season. Adam had a loan spell at Alloa Athletic earlier in that season, but failed to deliver any goals for the 2nd Division club. His father Tommy Coakley was also reported to be interested in buying the club in 2007 but that particular deal fell through. Upon leaving the ‘Well, Adam had a trial at Partick Thistle but failed to win a contract with Ian McCall’s side. He did however get a 6 month contract with Greenock Morton but would leave Cappielow in January 2008 as he struggled to make any real impact.

The highlights of his Motherwell career must be indeed winning three under 18 Scotland caps, Adam would play in sides that faced Malta, Northern Ireland and finally Belgium.