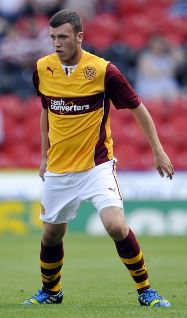 Centre Back, Cummins came through the ranks with Everton but after failing to make the breakthrough in the first team squad he was allowed to leave the club. Motherwell swiftly signed the young defender for their U19 team. Injuries would hamper his progress in the first team but as luck would have it, it was a string of injuries to the first team which led to him getting his first team debut. On 17th March 2012 he put in a solid performance as Motherwell beat Aberdeen 1-0 at Fir Park.