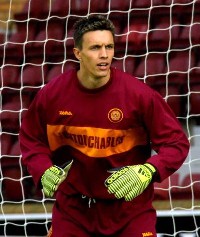 Barry came through the ranks at Celtic, he found himself on the bench on a regular basis. His big break came when he was just 17, an injury to Jonathon Gould in the first half of a game against Hearts at Tynecastle, young Barry was thrown in to replace him. The final score was 4-2 to Celtic and he was praised by the manager, the fans and the press for such an outstanding performance. It was even predicted he would go onto big things but sadly he picked up a back injury which would ruin his career if it wasn’t operated on so he had to take a while out the game. Thankfully the operation was a success and he returned to Celtic, he found himself away down the pecking order and was loaned out to Queen’s Park where he managed 12 first team games. He was eventually released from Celtic in 2003, but Terry Butcher was quick off the mark to capture this talented keeper as backup to Gordon Marshall. He made his debut against English side Fulham in a pre-season game which finished 2-2.

Terry Butcher was eager to keep him at Fir Park when his contract expired but Barry was keen to cement a first team place elsewhere, as fate would have veteran goalkeeper Gordon Marshall would suffer an injury in the first game of the season which essentially would put paid to his career, new backup Graeme Smith profited from that.