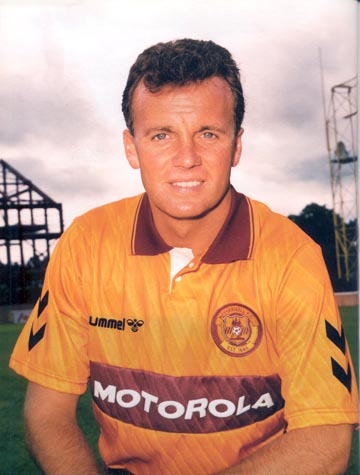 Born in Hamilton, Davie Cooper joined Motherwell in 1989 for £50,000, having lost his place at Rangers and seemingly nearing the end of a most successful career which brought a whole array of honours. It was not to be and in his twilight years at Fir Park he revealed himself to be a quite extraordinary player whose guile and skill more than made up for advancing years. Cooper was clearly a match winner, a skilled craftsman and an almost unique talent. His Rangers career spanned 12 years, many of there fans would bemoan such a loss of the talented midfield player. Davie was a tremendous talent, not only did he possess exceptional set piece talent and passing ability he proved to be a real wizard on the ball.

For Tommy McLean to have landed such a prestigious and obvious talent for only £50,000 was a coup. He won a Scottish Cup medal whilst at Fir Park and resurrected his international career. Tragically, Davie died shortly after leaving Motherwell, whilst playing for Clydebank and filming a kids TV football series. It is no exaggeration to say that the Scottish nation was both stunned and deeply saddened by his untimely death.