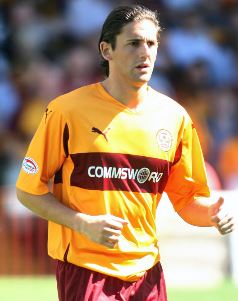 Esteban Casagolda arrived in the UK from Belgium where the striker had spent most of his career. Initially he went on trial to English club Stockport County. Rumours circulated on Motherwell message boards that a ‘Goal Machine’ was in talks about joining the club and after weeks of speculation it was confirmed, Casagolda would be participating in a trial match at Fir Park in august 2010. He never really stood out in the match but manager Craig Brown obviously seen something he liked and offered him a one year deal. Brown described him as a rough diamond. He made his debut on the opening day of the 2010/11 season coming on as a substitute and he would follow this up by starting the next fixture at Rugby Park against Kilmarnock, where he would set up Nick Blackman for the winner. Despite showing up well in the first few games he would find himself at the bottom of the pecking order of strikers which included Murphy, Blackman, Sutton and Alan Gow. Esteban would feature sporadically over the season and it became clear he wasn’t going to be the goal machine we all hoped for. His contract wasn’t renewed at the end of the season and he left Fir Park having failed to convince the Fir Park faithful that he was the striker of their dreams. He would make a swift return to Belgian football joining Union St. Gilloise.