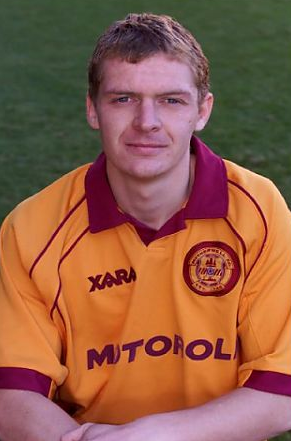 Came through the ranks at Falkirk, he was a talented young full back. Motherwell snapped him up in January 2000 and he instantly solved their right back problem. He made his debut as a substitute away to St Johnstone. He would sometimes slide in with late or needless tackles and was prone to the odd mistake thus giving the opposition the advantage. By the time Terry Butcher took over as manager, Martyn had ironed out the mistakes and become a consistent performer.

In season 2002/03, he only picked up one yellow card. His first goal for the club came at Fir Park on 1st April 2000. Motherwell won 2-1 thanks to Martyn’s last minute winner. In season 2002/03 he went from playing right back to centre back beside David Partridge. During that season, he played in every single game and had played every minute of every game until the final game of the season, when he was substituted for youngster Ross Ballantyne. Because of level of consistency of his performances the ‘Well fans nicknamed him ‘Kaiser’ and he was voted Motherwell Player of the Year.