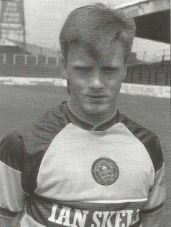 Neil Candlish joined Motherwell in 1985 but Tommy McLean swiftly farmed him out on loan to Wishaw Juniors to gain some vital experience. He was one of those players who had all the necessary traits required to be a successful forward and the club’s management felt that with the right guidance he could become a key player for the side in future, sadly however Neil failed to live up to the hype and didn’t make the expected impact with the club. The majority of his career was spent in Northern Ireland where he would prove to be a hit representing the likes of Glentoran, Ballymena United and Portadown.