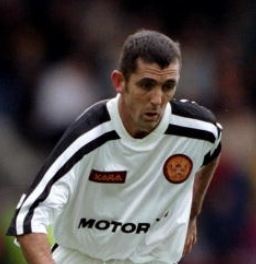 He started his senior career at Dumbarton before making the short move to Clydebank where his scoring prowess was noted. Airdrie spent £175,000 to take him to Broomfield and he really hit the high spots there, netting 17 goals in just 7 games at one point. Transfer speculation followed and £250,000 took him to Bolton. A dramatic FA Cup winner against Everton and a goal at Wembley in the play-off final were arguably the high point of his stay in England. It was Alex McLeish who signed Owen from Dundee United and this saw well favourite Jamie Dolan go in the other direction. After a few years with the Steelmen he joined Dick Campbell’s Dunfermline side for £150,000 during season 98/99. He left Motherwell scoring 34 goals in 96 games.