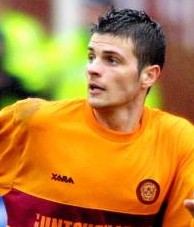 Son of Celtic legend Joe Craig. Steven was snapped up for Falkirk by Alex Totten when he was released by Raith Rovers after his YTS spell was completed. Interestingly during this spell he was coached by none other than Terry Butcher. While at Falkirk Steven had established himself as a regular in the squad but at the beginning of the 2002/03 season he had a groin injury which kept him out for 3 months and when he returned they had a settled side. He was told he was not needed by the club, so in January 2003 Terry Butcher signed him on a short term contract, which would be extended if he impressed. His debut came in a 1-0 defeat by Kilmarnock on the 29th January 2003. He took his time finding his feet in the SPL, he scored his first goal on February 19th in a 2-1 win over Dunfermline. The turning point came on the 24th March when he scored 4 goals in a reserve game. He scored in the Scottish Cup semi-final as Rangers defeated Motherwell 4-3 and he scored in a brilliant 6-2 victory over Livingston. His contract was extended.