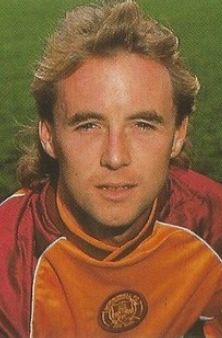 Stevie Cowan joined the club in 1987 coming from Hibernian. A popular player, he was a good goalscorer at Easter Road but his finishing touch deserted him somewhat at Fir Park, and after only two seasons he seemed to just leave under a cloud. Stevie started his career with St Mirren under the tutelage of Alex Ferguson, he would follow Fergie to Aberdeen but he was more or less a fringe player at Pittodrie before moving onto Hibernian. He later starred in Irish football with Portadown where he scored goals aplenty.