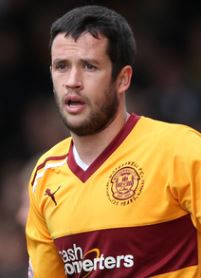 Stuart McCall signed versatile defender Tim Clancy in August 2011 after Steven Saunders was ruled out with a long term injury which he sustained on international duty. Tim certainly added an extra dimension to the squad as he could play anywhere along the defensive line quite comfortably. He was perhaps not the most exciting of signings as he had just be released by SPL rivals Kilmarnock. He would make his debut against Dunfermline Athletic in a 4-2 victory at East End Park before suffering back to back losses which included a 4-0 defeat at the hands of Celtic and a 3-0 defeat against St Johnstone where he would unfortunately score an Own Goal. He would however bounce back and prove to be quite an astute signing as he put in some high calibre performances and would even keep ‘Well favourite Stephen Craigan out of the side for a lengthy period. He would help the side cement a 3rd place finish in the SPL and guarantee a place in the Champions League for the first time in the clubs history.

At the end of the season he was offered a contract extension but declined the offer before joining Hibernian. His first season at Easter Road was curtailed by injury. Tim had been capped at U19 level by Republic of Ireland.