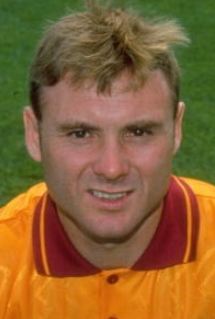 Tommy Coyne started out at Hillwood Boys Club before trying his luck at Clydebank, Dundee United, Dundee, Celtic and Tranmere. He signed for Motherwell in November 1993. In 132 league games for the club, spanning 5 seasons, he netted a fine 59 goals. Motherwell signed Coyne from Tranmere Rovers for £125,000. He topped the ‘Well scoring charts and furthered his international career with the Republic of Ireland, playing in the 1994 World Cup finals in the United States. Nicknamed ‘The Cobra’ due to his lightning quick reflexes, he was a marvellous goal predator and formed an excellent partnership with both Dougie Arnott and Owen Coyle. He returned to Dundee in 1998, then had spells at Falkirk (on loan), Clydebank again and latterly Albion Rovers. Through all this, he won 22 caps for the Republic of Ireland. The Glasgow born forward will always be associated with Celtic – he made over 100 appearances at Parkhead but he gave his all for the Steelmen. Man of many clubs, Tommy Coyne is a player unlikely to be forgotten by the Motherwell fans.