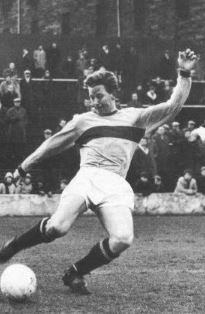 Walter Carlyle started his career with Shettleston Juniors before being signed up by Dundee United in 1960. At Tannadice, the right winger/forward performed consistently well in almost 4 years, his league form saw him score 45 goals in 105 matches. Impressed by his credentials thus far, Motherwell were happy to part with around £7,000 for his services in 1963, at the time of the transfer it seemed like the club had managed to pull off a major bargain but sadly he could not reproduce the same form consistently for Motherwell and after only one season with the club he moved back up to Tayside but this time joining St Johnstone. Walter played 30 games for the club hitting the back of the net on 7 occasions.