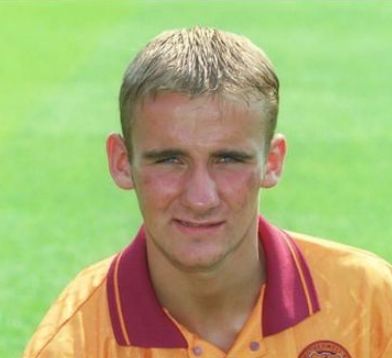 Greig Denham progressed through the youth setup at Fir Park and in the early 90’s he was farmed out to junior side Cumbernauld United to gain some experience. He broke into the side as an 18 year old under Alex McLeish during the 1995/96 season making his debut against Aberdeen in October 1995 in a 2-1 win, later in the year he was given the man of the match award in a match versus Rangers in a 0-0 draw which was shown live on Sky TV.

Despite a promising start to his football career he would suffer a cruciate ligament injury in 1998 just as he was starting to become a regular feature in the starting eleven. Greig certainly had all the necessary credentials to succeed in the Scottish top flight as he was a tall, strong centre back. He would break back into the side under Billy Davies but he was unfortunate that he was in a side that got a cash boost from new chairman John Boyle, new additions such as Michel Doesburg, Shaun Teale, Greg Strong, Tony Thomas and Benito Kemble all arrived which pushed Denham further down the pecking order.

In May 2000 he joined First Division Falkirk where he linked up with former team mate Kevin Christie in the defensive line, he was also named the club captain at Brockville but again he was unlucky as injuries would hamper his progress and limit his appearances there. After a disastrous season from the Bairns which almost seen them relegated to the Second Division in 2002 only being saved on a technicality as Airdrieonians went out of business, he would depart the club.

Greig would spend the rest of his career in the lower leagues featuring for the like of St Mirren, Arbroath, East Stirlingshire, Stenhousemuir and Linlithgow Rose.