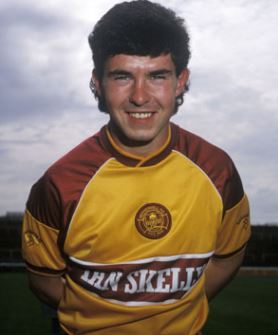 Jamie signed as a youngster for the Steelmen in the late eighties, and as a youngster he was played in a number of positions in the first team by Tommy McLean and Jamie looked delighted just to get a game and showed us his committed style this early in his well career. Jamie was a key squad member of the side that won the Scottish Cup, playing a key role in midfield against Aberdeen in the third round.

It was in the year after this that Jamie came into his own when Colin O’Neill was forced to retire through injury and he forced his way into Tommy McLean’s regular selection as ‘Psycho’s’ replacement. The midfield that Jamie played in was one of the best ever seen at Fir Park, with Dolan as the anchor and allowing Paul Lambert and Billy Davies to perform the creative roles. During this spell we played in Europe twice after finishing 3rd and 2nd in the league.

Jamie left the club during Alex McLeish’s spell, he went in Dundee United’s direction while £75,000 and Owen Coyle came our way. Jamie was linking up with old boss Tommy McLean at United. I also think its worth noting Jamie played in goals for Motherwell when Scott Howie got injured in a match against Celtic, Jamie proved he can play in any position and funnily enough the ‘Well beat Celtic 2-1.