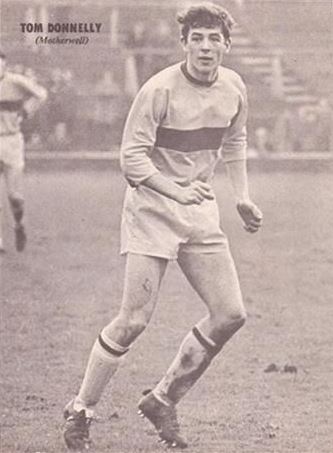 Tom was an ex-Rangers player and he joined Motherwell via the Ibrox club in 1967, he had been given a free transfer. He settled well into the Fir Park scene and he created several goals for John ‘Dixie’ Deans. Tom, a university student, took great delight in scoring a goal in a 2-2 draw against his former employers Rangers in 1969.

Tom Donnelly signed for Motherwell during the 1968 close season. 22 year old attacking wing-half from Ayrshire signed for the club shortly after he had been surprisingly released by Rangers, in the face of strong competition from Kilmarnock. He joined East Stirlingshire in 1971.

Tom joined the Ibrox brigade direct from schools football in 1964 but failed to displace the established John Greig or Alex Smith who had joined them to break the clubs record transfer fee.

Kilwinning lad Tom was a wing-half in the Cumnock Academy side which was beaten in the Scottish Secondary Schools Shield final at Hampden by Dalziel High School – who of course were managed by Wilson Humphries.