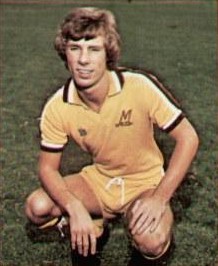 Part of a talented group of reserve players at Parkhead known as the ‘Quality Street Kids’, Vic Davidson was surprisingly freed by Celtic in June 1975, he was snapped up by Motherwell on a free transfer shortly after. Vic proved to be an influential player for the Steelmen. He was an extremely talented midfield player, he had great skills on the ball and also could also pop up and score a goal. With Celtic he had been a regular marksmen in the reserves alongside the likes of Lou Macari and Kenny Dalglish, but couldn’t quite make the breakthrough. Ironically Vic scored four Premier League goals against Celtic in three seasons at Fir Park, making 128 appearances in all. Perhaps his most notable feat was to join these elite ‘Well heroes who had scored five goals in a game, achieving this against Alloa Athletic in an Anglo-Scottish Cup tie on 6th August 1977 at Fir Park. He later went on to feature for Blackpool in the English leagues before having a brief return to Celtic before he went onto settle in the United States playing some indoor football with Phoenix Inferno, Cleveland Force and Canton Invaders.