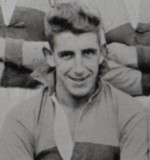 Willie Dowall was a member of the great Motherwell team of the early 1930s. He was a prolific scorer but also extremely versatile. He played on both wings and at full-back as well. He was ‘Well’s regular centre-forward until he was dropped and replaced by Willie McFadyen on Xmas Day 1930.

In 1934-35 he played just six league games for ‘Well, without scoring, and went to St Mirren on loan where he played 15 times, scoring once. Willie joined Bury in the close season in 1935.

His versatility counted against him at Motherwell as he was never able to lay claim to a position of his own. He also suffered badly with injuries.