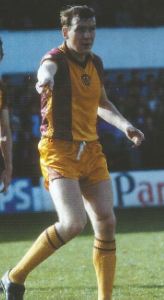 When Motherwell signed Jóhannes Eðvaldsson, he was an Icelandic internationalist, he joined the Steelmen in the twilight of his career in August 1982 when he was lured by Jock Wallace from German side Hannover. There was only 1,079 present to witness his debut against Forfar Athletic in the League Cup, his league debut came against Rangers in a 2-2 draw a few days later. Eðvaldsson completed his first season making 35 appearances and getting on the score sheet on two occasions, the first of which came against Aberdeen.

Big Shuggie as he was effectively known was a tenacious defender and an uncompromising individual, he certainly proved to be an asset to the team as he could often also be deployed in a midfield or forward role, by the time he was released in April 1984 he had scored 6 goals in 65 appearances, Johannes was an asset in and around the box when their were set pieces, as decades have passed he is still fondly remembered by some of the Fir Park faithful.

Prior to playing with Motherwell, Johannes had also served Celtic, Metz, Hannover and Valur. While on the books at Parkhead on one occasion he hit a rocket shot from around 40 yards out which quite astonishingly beat the keeper, unfortunately though for the Icelandic it was into his own net.