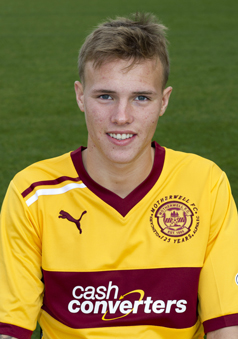 Lee Erwin progressed through the Motherwell youth system and from an early age their were high hopes of him as he matured well in each age group, at the age of 16 he was a regular fixture in the U19s side, this of course wouldn’t go unnoticed as he would also win caps with Scotland at U17 and U18 level.

Sadly his progress was halted with two serious injuries early in his career, the first in September 2012 where a knee injury kept him on the sidelines for almost 5 months. The second setback came after he had enjoyed a fruitful loan spell at Arbroath during the 2013/14 season where he netted 8 goals in 11 appearances, fans and management had clearly taken notice of the youngsters performances and big things were indeed expected. Lee had barely been back at Fir Park a week before an injury in an U20s cup tie that would rule him out until the tail end of the season.

Despite all the set backs Lee would make his debut for the club at the beginning of the 2014/15 season, coming on as a sub in the 2-2 draw against Stjarnan in a Europa League qualifier. He would follow this up by netting the winner on the opening league fixture against St Mirren.

Lees father Harry was also a professional footballer who played as a defender spent most of his career in the lower leagues in Scotland with Airdrieonians, East Stirling, Alloa Athletic and Stenhousemuir.