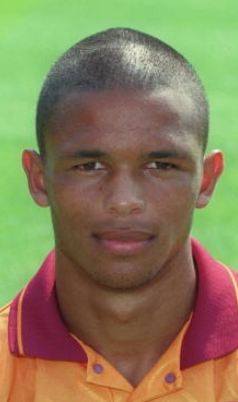 Roy Essandoh joined Motherwell as a teenager, he was a tall and athletic forward who certainly had the credentials to succeed in the game, he was lured away from Glentoran in Northern Ireland alongside Stephen Craigan and was quickly farmed out to Cumbernauld United to gain some experience.

In truth Roy struggled to make any real impact as the likes of Tommy Coyne and Dougie Arnott barred his route to the first team. He would only make a handful of substitute appearances before leaving on a free transfer in 1997. Perhaps a moment which summed up his Motherwell career came in Colin O’Neill’s testimonial match against Ipswich Town where he won the ball in the ‘Well half and went on a marauding run forward and with only the keeper to beat he somehow slipped under no pressure and lost possession.

Roy did manage to enjoy the limelight in England for a brief period, Wycombe Wanderers who were short on strikers put out an advert on Ceefax urgently looking for any players without a club that might be able to fill the void, The Choirboys of course had enjoyed great success in the 2000/01 FA Cup as they had gotten to the quarter-final stage to face Premiership Leicester City, as luck would have it Roy would net a 90th minute winner to set up a show piece semi-final versus Liverpool. This was perhaps his biggest highlight as he would spent most of his career in the lower echelons of English football.