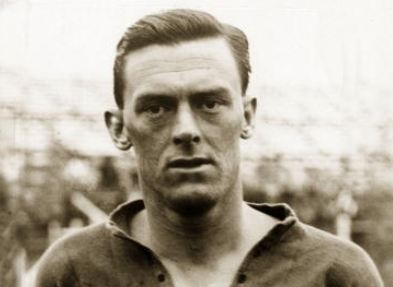 Bobby Ferrier signed for Motherwell on the 18th December 1917, he came direct from Glasgow junior side, Petershill. He had to wait until the following season to make his first team debut and this came against Kilmarnock at Fir Park, but throughout that 1918/19 campaign, ‘Sailor’ Hunter used no fewer than six different left wingers. The following season the occupier of that position, Billy Morgan left to return home to England to join Birmingham City. Bobby then soon made the left wing his own.

He went on to develop into a classy outside left player and soon gained international recognition. Sadly because he was born in Sheffield, he couldn’t feature for Scotland even though his father was Scottish. He had however been capped for the Scottish League against the Irish and twice against the English league, he scored five goals in all. In 1921, he was picked for the Scottish side to face the Irish league but he was soon dropped when it became apparent that he had been born in England. Bobby was never the quickest of wingers but he more than made up for a lack of pace. He could send in pin-point crosses which would contribute so much to the exploits of Willie McFadyen. By 1927, he was named captain and he held the honour until it was passed to Allan Craig. Bob felt it was only right to share the responsibility around.

One great piece of skill Ferrier pulled off in games time and time again was that he could sent a swerving rocket shot, usually on the bye line. So many top goalkeepers were fooled as the ball usually veered around them and in the back of the net. After twenty years at Fir Park, Bobby finally called it a day. In league and cup competitions, he had featured in 697 games scoring a remarkable 270 times. In May 1938, Bobby was appointed the club’s first assistant manager. He currently stands as Motherwell’s most played player and I don’t think his 697 appearances for the club will ever be matched. Bobby was a member of Motherwell’s ‘famous-five’ which included Murdoch, McMenemy, McFadyen and Stevenson.