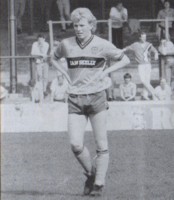 Glasgow born midfielder Gary Fraser arrived at Fir Park from Queen’s Park during the summer of 1986. He had broken into the Spiders first team at a young age and a number of impressive performances attracted the Motherwell management. He made 79 league appearances scoring 19 goals while on the books at Hampden.

A small industrious player, he made his first start in claret and amber against Dundee on the 27th January 1987 but he struggled to impose himself into the ‘Well first team and was released in 1988.

His next port of call was Queen of the South where he would enjoy some better success as he made over a century of appearances for the Doonhamer’s in all competitions. In 1993 he joined junior outfit Pollock.