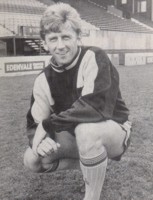 Players who learn their trade with Fir Park Boys Club usually join Motherwell, but this wasn’t the case for Iain Ferguson. Born in Newarthill, he played for Fir Park BC in the late 1970’s and he joined Motherwell in December 1990. As a youngster Iain caught the eye of Dundee and his good form at Dens Park earned him a move to Ibrox with Rangers. Ferguson did quite well in Govan which including scoring the winning goal in the 1984 League Cup Final, but he was allowed to join Dundee United in 1986 with Jim McLean paying £145,000 for his services.

At Tannadice he scored a number of high profile goals in Europe en route to the 1987 Uefa Cup Final which include the winning goal against Barcelona at Camp Nou and against Borussia Mönchengladbach but ultimately he would end up with a runners up medal, Iain would appear in back to back Scottish Cup finals for United but would have to settle for a runners up medal on both occasions (1986–87, 1987–88).

Next up came a move to Hearts, this time he scored another memorable European goal, this time against Bayern Munich. In December 1990, Tommy McLean signed Iain for Motherwell for £100,000, this time he scored the first goal in the 1991 Scottish Cup final against his previous employers and would finally enjoy getting his hands on the trophy. Never the most consistent of players to represent the club his name is however rightfully embedded into the Motherwell folklore for playing a pivotal role in May 1991. Ferguson moved to rivals Airdrie in September 1993 and he had spells with Portadown, Dundee and Dundalk before bringing the curtain down on his career.